My usual collection of random hike and run stuff for the year. Surely, you have better things to read than this?

Did this in 1:30, pretty damn slow, in 92 degree heat and feeling injured.

Did this in 3:29 with Kam. Same basic time from R to peak as before, and time to Poway was only about 5 min slower. It was on the way back where we lost most time.

Did this? I assume we bailed out at the ski lodge.

Generally, never felt good. Tired for obvious reasons. Shins a bit off on descents. Mild bonk on climb from Poway so that I was passed by three chubby 20-somethings. Kind of heart breaking. Suspect salt related.

I was 212 lbs when I left woke in the morning. I was 206 when I got back. That was with the addition of pre-, mid- and post-hike drinking. Somewhere in here I lost a gross of 15-20 lbs and net 6 lbs in less than 3 hours. Not sure how to manage. I’ll need to experiment with a lot more pure salt / iron intake vs. electrolytes and evaluate impact / stomach response.

During prior week, only light workouts, but legs still weak:

Also, Achilles does not seem to be healing. In some sort of steady-state, but no idea how to get back to full running condition.

Felt fine. 3:28. Kam felt slow but it was pretty close to her best time.

Not sure of times. Kam was feeling pretty off, but still made good time.

Not sure of times. Kam was feeling pretty off, and we were a bit slow. Hot.

For various reasons, I had not worked out in a week and wanted to see how this would feel. The loop is really an out-and-back from (in this case) Highway 67 in Ramona to Lake Poway rather than a loop, but loop sounds cooler. It just means summiting Woodson twice. The stats are 10.1 miles and 3,300′ elevation gain and loss. I thought it was closer to 11 miles, but my phone says I’m deluded. I may need a new phone.

Did the loop in about 3:12 w/o running, but with unfortunate bonk-like breakdown about halfway back up from Lake Poway. I suspect this has something to do with salt and/or water loss (I lost net 12 lb+ on the hike, but took in water and electrolytes as I went).  Also took salt pills. Splits:

It was in the 80s, so I was sweating plenty and the breakdown came on quickly. I was fine at the picnic tables (cruising, not breathing that hard), then suddenly I was breathing really hard and my legs started to lose steam. Had to rest a few times, which makes no sense.

Hypothesis 1: Too much salt loss, so experiment with direct salt packet intake next time and see if that helps (maybe salt in water too, not just electrolytes. If this is true, I really just need to stay out of the heat; it’s not my thing. I did notice that my hands were unusually swollen at one point, which either means dehydration or too much salt intake, ironically.  Or something else.

Hypothesis 2: Concurrent iron loss. Seems unlikely, but I do sweat a whole bunch.

Hypothesis 3: I’m out of shape in terms of endurance / distance. Maybe, but doesn’t really explain how it came on so quickly or why I felt fine once the hike was over (no fatigue, just thirsty and annoyed).

Kam and I are both injured, so we’ve lost both the enthusiasm for some of our hikes and the will to drive long distances. This, combined with my insomnia, means some late starts on hot San Diego hikes. So, this hike seemed like the perfect time to experiment with food and water intake.

Two weekends ago, we did the same hike from Lake Poway, which is 2-3 miles shorter (call it 7.5 miles) relatively early in the morning. I did that hike without food or water and felt great; actually, better than usual.

The hike from Blue Sky is almost exactly 10.5 miles round-trip to the peak. We started at 10:30 am or thereabouts when it was already above 80 in the parking lot. I took no food or water just to see how it went. And it went amusingly.

To make sure we started off well hydrated and chock-full of glycogen, we drank wine the night before and had caramel corn for dinner at the movies, along with very little water. Thus, our bodies were already nice in shock before we even started.

The hike started off well enough. It was hot and dry, and we sweat a lot. I felt fine until the picnic tables that are roughly 2.1 miles from the peak. I started feeling hot and breathing harder than I should be. That was a little more than an hour in under the bright sun, so I figured it was the initial signs of mild dehydration and my usual early bonking (I just don’t do well without carbs when I hike / run).

Things slowly degraded from there. I had to rest a few times on the way up, which was unusual, but Kam was very patient.  We made the peak in exactly two hours, but I felt worked and my legs were oddly tired, as in shaky and weak, as if I’d done  a much harder workout. I figure that was the low blood sugar more than actual fatigue, but my balance was also slightly off so we rested a few in the peak in a nice light breeze.

We fast-hiked down to the lake junction easily enough, and while it was hot, it was still pleasant enough even if all the little uphills were taking their toll on me. The traverse around the lake and down to Blue Sky is where I could feel the body starting to run down a bit more; I was breathing heavily even on the downhill, but it was still just more of an effort. There was no nausea or lightheadedness.

It’s about a mile from the (closed) bathrooms in Blue Sky to the trailhead, and that’s about where I really started to feel the lack of food. I didn’t really feel dehydrated (I was still sweating and felt hot, but not too hot, and my heart rate came down quickly when we rested), but I just had no energy in the legs. At 0.5 miles left, I started having to rest even on relatively flat ground.

At 0.2 miles to go, I was worked and slightly nauseated. There is a tiny little uphill at the end and I was dreading it. Sure enough, I had to rest twice just getting up that tiny hill and was nauseated all the way back to the car.

So, somewhere in there I should have learned something. I figure 90 min or so without food or water is fine, maybe 75 min in hot / dry weather. Maybe 120 min if properly hydrated, fed and rested beforehand. But after that, things fall apart quickly. Some of that could be training, but I suspect that my rate of sweat loss and carb-hungry muscles are not really made for low-cal / low-water endurance in the heat. I was truly worked when we got home.

My net water loss, taking into account what I drank in the car on the way home, was more than 10 lbs / 3 liters. I suspect what’s more important was salt and mineral loss, which is harder to estimate. And of course Kam was fine b/c she actually ate and drank like normal person — even though her net loss in water was almost the same (just 1 lb less), which is interesting.

Next, I need to figure out the minimum salt / water / carb intake required to stave off the bonk / dehydration for 4/5/6+ hour efforts. Let the experiments begin!

With my Achilles taking itself too seriously, we’re out of the mountains for a few weeks.  So we took a hike up Mt. Woodson from Lake Poway with the perennial herds of Potato Chip Rock enthusiasts. It was actually very pleasant not having to run the whole way and just enjoying the day, but hiking sure is slower than running.

What strikes me lately on these busy trails is both the general courtesy of most people combined with the complete cluelessness of some; the litter, the loud music, the synchronized flatulence and general lack of trail etiquette. There should be an outdoor behavior training course for humans…

For whatever reason, I’ve found it difficult to fully recover from a flu and cough that I had in February (Yes, February). A lack of discipline may have something to do with it.

Thought I’d try this quick 5.6-5.8 mile run up Iron Mountain yesterday to see where I was fitness-wise. Goal is around 1 hr. Ended up bonking really badly on the way up (obviously, diet is not working if I bonked on such a short run) and finished in a miserable, light-headed 1:31. Plus it was hot (95 by the sign thermometer).  Insert whining emoji.

On the same weekend, Jesse Haynes took 8th in the Western States and it was 131 in Death Valley. So, you know, look over there and not at the sweaty guy writing this. Lot’s of room for improvement…

We tried to do the Baldy 9-Peak Traverse and, of course, came up short. Kam’s booty injury reared it’s ugly head, and frankly I was getting too hot too fast. So we bailed at the 1st saddle back from Cucomonga. 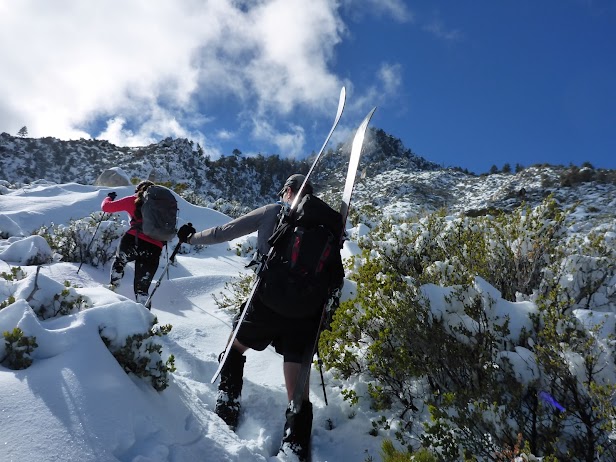 Crazy weird day. Hauled my skis up 7,000 feet and skied about 250 feet down in manzanita. We couldn’t summit b/c “somebody” didn’t bring snowshoes and his “wee” little feet punched through the snow like toothpicks. So we walked back down 7,000 feet and I banged my skis on every rock on the way down. Still fun.