My usual collection of random snippets on random hikes and runs, mostly hikes. This largely just notes for me and my friends, so read only if you’re super bored.

Kam and I took a short hike down Boucher from Hermit’s Rest to the lookout below Yuma Point. Very mellow day.

On a chilly day after not doing our annual R2R2R, because snow, we took a quick hike down to the river and back. I spent the whole day in shorts despite it being 20-30 degrees or so at the South Rim. Many people turned to stare / take pictures / say ridiculous things. It was like being a pretty girl for a day. Or a hideous monster. Hard to say.

We took a short day hike down the New Hance with mom to near the lookout above the lower canyon. On the way up, it started to snow on bare ground and within minutes the trail was obscured. Within 30 minutes it was nearly impossible to see where the trail went on the final rocky stretches. Beautiful big fat flakes of frozen happiness covered everything.

If I remember this day correctly, we also passed a plow when back on the road, got pulled over by the ranger, and mocked for being silly. Merry Christmas!

Good race. Kinda random. Drove up and back same day. Quads. Were. Shredded.

As I remember this day, Kam was oddly tired on our 10,500′ climb and 2,500′ descent. She let on a ways into it when her hammies seized that she had done a spin class the day before. Then, when she was limping, something about squats and leg workout. Then, when she had to rest after Wellman’s Divide, something about Pilates. All the same day. WTH. Turned a C2C2C into a C2C, but still a lot of fun. Saw Ben(?) Gary’s biker friend on trail, I think.

Did Skyline Trail (Museum in Palm Springs to Round Valley) in 3:57 (PB) with Huy encouraging me the whole way, which is my fastest time. Splits for those of you doing the trail were 1:45 to 4300 marker, 2:50 to Flat Rock, 3:31 to start of Traverse. You can tell speed fell dramatically above Flat Rock. I’d say if you were in better shape with stronger quads, you could take that same 1:45 spit at the 4300 marker and continue to a 3:35+/- finish (but it would be hard to continue on to do C2C). I think some guy named Brett Maune has the Skyline Trail FKT @ 2:16. Crazy.

We did a run-hike thing from from Humber Park to Mt. San Jacinto and back via Devil’s Slide Trail. I can’t remember how long it took, but we did race a 20-something ultra-runner down and I won. I may have fallen and cut myself up and he may have bonked, but whatever. Winning.

Funny, in retrospect, this is the run that taught me how much fun fast running downhill can be.

Great day peak-bagging with Kam and Huy. They’re so small, and yet so energetic. It’s like having your own hummingbirds. My first time on Cornell. Funny how much of a climber I am not. Floundered a pit at the exposed summit.

After a rather humorous and fortunate failure to do the Rae Lakes Look from Onion Valley as a dayhike, we decided to sleep, eat and have breakfast instead. Then we went most of the way up Langley. Followed by BBQ ribs in Lone Pine. Perfect.

No idea why John wants to do this, but we drove up late for Rae Lakes loop as a day hike, which was going to be a long painful slog no matter what. John got woozy and unstable on the way up to the first pass out of Onion Valley below Kearsarge, so we went back and got a room in Lone Pine. Silly John.

Did a hike that was supposed to be a two-peak hike including Williamson and Tyndall via Shepherd’s Pass, but ended up being neither. I felt awesome all the way to the pass, then just crashed on the traverse to Williamson. I think it retrospect it was salt.

Might have been a good thing; on the way down, my shoes tore up my feet rather badly due to design of Solomon shoes with lace that crosses over to big toe. Kam, of course, rocked.

Kam flew up the Friday of a business trip to Portland so we could do the Timberline Trail loop on Saturday. Unfortunately, I got a 24-hour virus that Friday evening and we had to cancel, so we just tooled about on various trails. I did get to show her one of the most beautiful viewpoints, so it was a nice day still.

After doing Mt. Russell the day before, we were going to do Langley but turned back after New Army Pass when clouds started gathering over the peak.

Great day. Hiked to Russell via the east ridge, which was nicely vertiginous.  Our plan was to continue from there up Whitney, but Huy was getting serious AMS and rain clouds were forming over Whitney.  So we bailed down one of the south chutes and then dropped into some heinous screen nonsense and back down toward the Mountaineer’s Route.

On the way, just as it started to rain, Huy vanished into the bushes for no reason, so we decided to wait for him in the rockfall below. Then it rained like hell and we hid under a giant rock. And screamed for Huy. Then I went out in the rain and hail and hunted for him. Then he appeared from the bushes as if by magic, having fallen in a hole or something, and we ran back down to the portal.

No, it didn’t make sense at the time either. 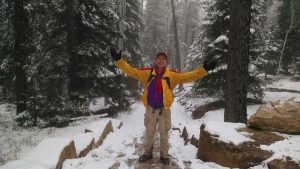 This was John’s third R2R2R and Kam’s second. I don’t remember much about it other than that it snowed, which was beautiful, and it was a great time with both of them. I’ll have to write about these things when they happen rather than a year later.

One thing I do recall is that I was less than enthusiastic. After a calf injury in March and a 50 miler two weeks earlier that I did basically off the couch, I was out of shape and my knees were still killing me. Just whining, but I kept trailing behind them the whole time and just wanted to lie down and nap.

Our route was South Kaibab to North and back again, the shortest option.

I wasn’t there, but it was cool!

Cool hike up SJ in the snow with John and Kam. Post-holing on the way down and hyperextended my knee a bit. Still a blast.

No recollection of this at all. I’m sure it was awesome.

We jogged from the community center parking lot to the west end of the Leona Divide course and back, something like 16-18 miles. It was a very pleasant day…and much less hot than it turned out to be on race day. 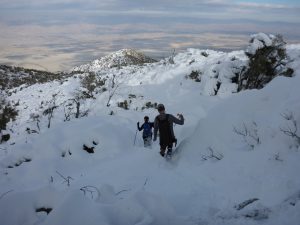 Tried to hike up in the snow and ended up postholing for several hundred feet.  Then we ran into Huy and he helped us get lost. Ha! I said it. Then we headed back down to Palm Springs. Fun day.