This is my usual collection of hikes and runs for the year, only noted if worthwhile, and not worth reading for anyone other than me. So…enjoy?

This was a cold, beautiful but slightly tragic day. We had a beautiful hike on the Fairyland Loop Trail fresh snow. The light was beautiful. It had been severely cold the night before, but it was perfect with the sun out and it kept the snow dry and crystalline.

On the way back on the rim, mom started having some heart issues and we ended up in the hospital the next day, but it was still a great memory. Mom rocks.

I don’t know why, but we didn’t do much at the GC this year. I think it was too cold or something. Ended up driving to Bryce, ironically, but first we did a day hike down South Kaibab to Cedar Ridge with mom.

This was my first ultra. I can’t say it was awesome, but it was memorable. I did of course fall at some point — doing a full roll down the trail about midway. It’s not a trail run with Shawn if there isn’t blood.

Third time I’ve run this, but it was after a week with fever / sickness and no running at all. No excuses, but it was way harder than it should have been. Wondering if antibiotics can do this? Hmm.  Need to be able to do this in 2:15 or less without much trouble, and soon. To the gym!

Route: From Iron Mountain out and back rather than from Ellie Lane start.

Strange combination of great and terrible day, but maybe that’s the nature of life. Kam and I intended to run the lollipop from Deer Springs to Marion Mountain to the summit of SJ, then return via Wellman Divide. Kam was iffy on her knee, and sure enough the start was rough on her. After talking at the 1st junction, then the next junction, she decided to turn back to the car.

I was actually feeling pretty good at my usual putt-putt pace, but was not looking forward too the high-stepping rocky pitches on upper Marion. Sure enough, that’s about when my legs started really feeling it. By the peak, I was crawling, but still made it in just under three hours (despite all the waiting and such earlier). I figured a bit of a rest and then I’d be off. But for some reason I really didn’t feel myself recovering, and the run down started, and stayed, slow.

Thought I heard a bear behind me on the way to Wellman, but it was just a young runner belching. He sailed past me and I never saw him again. I assume from the tram. After Wellman, I was cruisin’ okay and then ran into my friend Spring and her boyfriend. Good catching up. Ten or fifteen minutes later, was running again.

Felt pretty tired by the Deer Springs Junction, but the way down after the initial tiny climb was just cruising. Nice views. Beautiful day. Then I ran out of water about 1/2 mile after the junction to Marion Mountain, and it got hot, and I stopped using Gus, and it all went to hell pretty quickly.

The last two miles were 85+ and I totally, badly, embarrassingly bonked. I was still passing hikers, but barely, and the last mile I could have crawled faster than I was running. Go to the car and stopped, wobbled around on week legs, but couldn’t get my heart rate or breathing down. Took 5-10 min in car air conditioning and lots of water to feel even vaguely less terrible. Kam was very patient the whole time.

That said, my bonk probably had something to do with the fact that in covering more than 5,500′ vertical up and down over 19+ miles, and I had eaten no more than 7 Gus  (700 calories) plus whatever was in my Perpetuum and electrolytes. So, say, 1,100 calories vs. what should have been closer to 1,500 (@ 300 / hour after the 1st hour that you can theoretically process while running). Doesn’t sound like much of a deficit, but that calories burned were closer to 4,200, so the real deficit was 3,100. So a bonk was pretty inevitable, even if I wasn’t so dehydrated. Not sure why I ate so little.

Still, this was a real triumph for me; a run I’d never really thought I’d be able to do. It wasn’t fast or pretty, but it’s done.

On the way to visit my mom and Marcel at the north rim of the Grand Canyon, I took a swing through Utah to see a few parks I hadn’t been to before. The first stop was Cedar Breaks, which Mike had told me about. Beautiful little place, but small.

After driving over from Cedar Breaks, I did a quick hike up the Losee Canyon. It’s like an itty bitty Bryce with no people. Very nice.

Toward the middle of the day on the way to the Grand Canyon, I drove into Bryce for the first time since I was a kid. It was beautiful, but much smaller than I remembered. Didn’t take much time at all to do the rim drive and back.

We did a very mellow hike around the loop the day after doing Tyndall. I seem to remember that Kam’s knees were hurting, so we took it pretty easy.

Kam and I did a quickish dayhike up Mt. Tyndall, car-to-car.  It was the first time I realized that even thought Kam has done everything, she doesn’t remember any of it, so she can’t be trusted as a guide ;). Somehow we ended up on climbing the face of Tyndall instead of walking up the rock field on the north side. She may have been trying to kill me. Hmm.

No idea. I’m sure it was lovely. 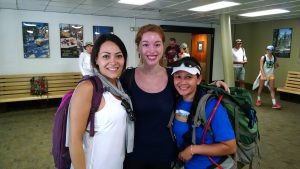 Beautiful weather for a hike up San Jacinto with family and friends. Yeah, we may have done the cinnamon challenge and saltine challenge the night before and, yes, there may have been some puking. Yes, “somebody” didn’t drink a lot of water and got AMS and was put on oxygen at the ranger station, but the ranger was cute and it made for a great story. Just don’t tell Shannon.

This is one of the few occasions I can remember where an injury prevented me from doing a hike. After finding the parking, walking up the road, starting the climb up to Iron Mountain (not the same one as in SD) and generally doing fine, I somehow tweaked my shin. It wouldn’t have been safe to continue, so a long hike turned into a short like with a lot of driving. Sorry, Kam! 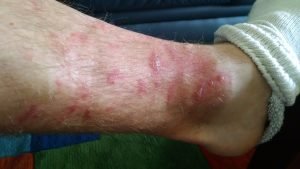 You may wonder why the main picture of a dayhike with friends in San Diego shows a giant blistered leg, and well you should. This is what happens when you walk through Poodle Dog Bush. It sucks, leaves marks for months, and is in many ways worse than Poison Oak or Ivy. This will teach us to get off trail. 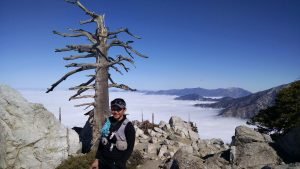 This was our first time doing what we’ve taken to calling the Baldy 9-Peaks Traverse. In this case, it starts at Icehouse Canyon and ends on Bear Flat Trail. The peaks in order are Ontario, Big Horn, Cucamonga, Timber, Telegraph, Thunder, Harwood, Baldy and Little Baldy. It’s about 30 miles with lots of up and down.

I don’t remember much about the hike, other than that Kam was unusually tired and didn’t do Harwood or Little Baldy. Bad, Kam, bad! To provide her motivation, I performed the entire first four seasons of Game of Thrones for her. That alone took me about seven hours of non-stop talking. I was pretty amazing.

On a beautiful day, we hiked up behind Angel’s Landing on the West Rim Trail. The loop took us through a lot of old burn, so the view wasn’t that great after the rim, but the latter part of the hike took in another part of the Rim I hadn’t seen before. Fun day.

As part of Kam’s birthday weekend, we took a first hike on the East Rim Trail in the rain. Ran into David L. in the parking lot, which was cool. Much later, ended up slogging in deep mud on dirt roads while some unfortunate runners tried to finish a Ragnar event. Really beautiful despite the rain.

Caught some peaks with John and Kam. Don’t actually remember this day, so I’m just going to say it was awesome.

After doing this with Mike some years earlier, I thought Kam might enjoy it even if it was a hot desert hike. Boy was I wrong. I think she wanted to kill me at one point. Fortunately, I’m speedy. To be fair, it had been a brutal drought and even the top of the peak was not all that attractive.

This was my first time on the Tanner. Mom took us down about midway where we had a great lunch and tooled about. In the parking lot at the end mom caught a shoelace and face-planted. Shoelaces are dangerous, but she was fine.

Did some light hiking on Volcan Mtn. and Garnet Peak with Kam.

John and I did a nice hike up Iron Mountain today. No recollection. I mean, none.

I did this yesterday with Andre again. He claims he was slow due to low hemoglobin or the alignment of the planets or the local gravity, but it was not evident to me. Good hike followed by good beers and then a chilly ride down the lift. Brr.

On the way we got back to the car, we helped push a white van full of very friendly older Asian couples off the side of the road. We asked them to unload the passengers to make the load lighter, and nearly 20 people got out. Van seemed much easier to move after that.

As far as trail conditions, the trail up was fine until after the rock crossing above the ski hut, and then there were periodic patches of slick snow all the way to the top. Would have been very icy in the morning. Trekking spikes and poles highly recommended. Path down Devil’s had far less snow coverage after the very top section.

Seventy-five back in San Diego. This is winter, right?

This was my first marathon distance run, at over 26 miles. It was slow and painful and occasionally quite awful, but I loved 84% of it.

Ran this again today with Kam. Thought I was faster on the way up, but I don’t think 2:29 qualifies as much faster than 2:30. Ran the full R/T, though, for a personal 1st — 19 miles is the longest I’ve ever run. It was a wee bit painful, but a good feeling to have done it.

A wee bit painful; when I finished I looked and felt like I’d been raped by Orcas, keelhauled in pickling brine, rolled in salt and dumped in a dungeon to fester and die. Kam looked like she’d just gotten back from a mani-peti with Richard Simmons and Tinkerbelle. But this means I get ice cream, so it all works out.

On a more technical note, food consumed included 3.5 Gus, 80% of Pro gel pack, 1 fig bar, 3 Gin-Gins, Perpetuum in water and some electrolytes. Total water consumed was about 2.25 liters; not nearly enough. Finished feeling sub-optimal, so probably needed more water, but not sure stomach would have taken more food. Kam ate nothing. Literally nothing. This is totally going to blow her cover as an alien who can’t consume human food.