It’s my pleasure today to have with me in the C2C studios the world’s hottest man, or at least the man who briefly and stupidly stood in the hottest place on earth for a few minutes before fleeing to his air conditioned car. Welcome, HotMan13155.

Thank you for that ambivalent introduction. It’s great to be here, or anywhere that’s not hotter than the surface of the sun. Also, this is way better than doing actual work.

C2C: So let’s start with with obvious; where were you when you attained peak global hotness, and why?

The previous record for the hottest temperature on Earth was set in Furnace Creek in Death Valley, California, in 1913. So when I saw the forecast, I thought that was the place to be. Honestly, how can you not want to be in the hottest place just to know what it feels like? #YOLO, motherfucker! I immediately regret saying that. I was hiking in the Sierras on Sunday, August 17th and Death Valley was only a hundred or so miles away, so I picked up some water and snacks and headed south on the highway to hell. It was fun just watching the temperature tick up…

C2C: Were you worried your car might catch fire?

Yes. For some reason the internal temperature gauge on Subaru Outbacks maxes out at 122. I thought the car would spontaneously combust when I reached that temperature by Stovepipe Wells, but it turns out they were just too cheap to install a better sensor. It was kind of a let down. The car was fine. Turns out that a lot of people on Reddit were concerned about the car after somebody posted my picture there:

The air conditioning kept things nice and cool on the drive,  but the windows were burning hot, which was disconcerting. To avoid overheating, I turned off the AC and rolled down the windows on the ascent after Panamint Springs when the temp hit 118. You know how you can hold your hand over a flame until your flesh slowly starts to burn? Well, same thing holding your hand out the window of a car at 70 mph when it’s nearly 120. It burns. Kinda crazy. So I had to do it again. Yep, still burns.

They were fine, but to be safe I engine-braked on all the steep hills. Paid for those paddle shifters, so I might as well use them. I also might have been speeding a bit. If you were that dude coming up the whoop-de-doos  from Stovepipe, sorry I scared you, but no, it wasn’t a mirage; Subarus can fly.

C2C: Why did you stop at Furnace Creek instead of Badwater?

That’s where the record was, and they had an open bookstore at the visitor center. I was very focused on air conditioning, and also food. I had only brought snacks from Lone Pine, and I wanted real food. Fortunately, they had some lovely cold sandwiches in the shop. And they didn’t mind me asking original questions like, “How do you live here?” and “Does your hair ever catch fire?”

C2C: So, how did it feel getting out of the car?

I parked in a shaded area. For some reason, one or two cars parked in direct sunlight. I have no idea how they got back in without dying. Anyway, I opened the door and it was like stepping into an oven. Dry, stunningly hot, but still okay in the shade. It was fine until I walked into the sun, and then it freaking hurt. I mean, you could just tell your body wasn’t having it. I glanced at the thermometer, checked my watch (I was close to when peak temp was supposed to happen, and didn’t want to miss it), and headed for the store. It was a thirty-second walk and that was enough of that. The AC was heaven.

After the bookstore, I stopped by the outdoor thermometer to take the selfie you see above (and which has since gone viral). It was 3:37 pm, and I think the official record was at 3:41 (or will be when confirmed), so i was literally the hottest damn man on the planet for a few minutes (you know, if you ignore anything indoors, other people staggering around in the heat, places without officially calibrated thermometers and other inconvenient facts). Screw it. I was hot AF and no one else was even close.

Random things going through me head: wow, my phone is hot; why are the tops of my ears on fire; I can’t believe I’m not sweating more; if I wasn’t single, I could have the hottest sex on earth right now; no, that would probably kill me; it’d be worth it; there are surprisingly few girls out here; wow, my phone is really hot; oh, there’s a ranger in a Subaru (I should ask about the thermometer); okay, now there are no girls out here; why are my eyes burning; I smell like bacon; time to go.

Getting back in my car was a bit miserable, but at least the sun hadn’t been baking the black leather seats. That would have sucked. Shade is awesome.

C2C: Why are you wearing a face mask?

Because I’m not a savage. Kidding; I forgot I had it on. It’s required in the bookstore and it seemed like a lot of effort to take it off.

Also, I was making a political statement. Not. But seriously, screw you if you can’t wear a mask in an air conditioned damned store. In this case, though, with no one around, it was largely due to sloth and a mildly baked brain. I mean, I’d forgotten my hat and sunglasses. Clearly, I wasn’t thinking clearly. Did mention the chips?

Okay, so, in Lone Pine before driving toward Death Valley I couldn’t figure out what to eat so of course I bought a bag of Doritos FLAMIN’ HOT® Limón chips. I mean, it just seemed appropriate and I love spicy foods. So the whole drive, I’m jamming these firey things in my mouth, and they are not kidding; these are FLAMIN’ HOT chips like oral magma (trademarked). It was kinda painful. And perfect. And also painful. Plus that red dye never comes out. Anyway, the whole time I’m taking my selfie of infinite hotness, my stomach’s on fire and I was pretty sure if I farted I could melt the sign. It was a thing, but I didn’t want to cheat on the max temp, so I clenched. Sorry if that’s TMI, but the mask is hiding flamin’ hot grimace, so…moving on.

C2C: Did you see people hiking out there?

Almost. I stopped at Zabriskie Point on the way out so I could take a short walk to the lookout and gaze at hot lumpy rocks from a taller, lumpier rock. On the way, I passed four heavyset guys in sweatpants and Camel Packs looking at the information sign and talking about doing a “short hike”. I snorted derisively and that was apparently all it took to throw off their game. They decided to climb to the viewpoint instead, and it took them a while. I think I saved lives. But seriously, who hikes in that heat in long black pants?

Yeah, how long could you survive out here at 130? No one really seems to know. There’s lots of information online (e.g., Quora), but there are lots of variables (like health, shade, access to water, electrolytes, etc.). People run the Badwater in similar temps, even if their shoes occasionally melt. People are tough. Not me–I would die in hours–but other people.

C2C: Were you surprised by the reaction on Facebook?

Not really. It was a funny pic and worth a few likes, and there were more popular posts about dirty feet and the usual summer rescues. It wasn’t a big deal until someone posted it on Reddit. I still don’t know who posted it there. Social media is weird.

I don’t even have an account. Someone told me I was trending and I had to search on Google to figure out what the hell they were talking about. Turns out my picture was a top post in /r/pics and, more importantly, /r/hot (yeah, baby). I was going viral, and of course everyone’s comments were positive and supportive, which was great.

The picture also made a lot of people hungry as well as thirsty. There were several discussions about the right temperature to cook me, grill vs. Sous Vide, and so on. Made me crave some In-N-Out. But seriously, that’s not where the meat thermometer goes. Pervs.

What’s crazy is that as I answer your deep and incredibly insightful questions, my picture is THE top post on Reddit. Yeah, that’s me in the black face mask. I’m internet famous for the next 24.2 seconds. Whee… 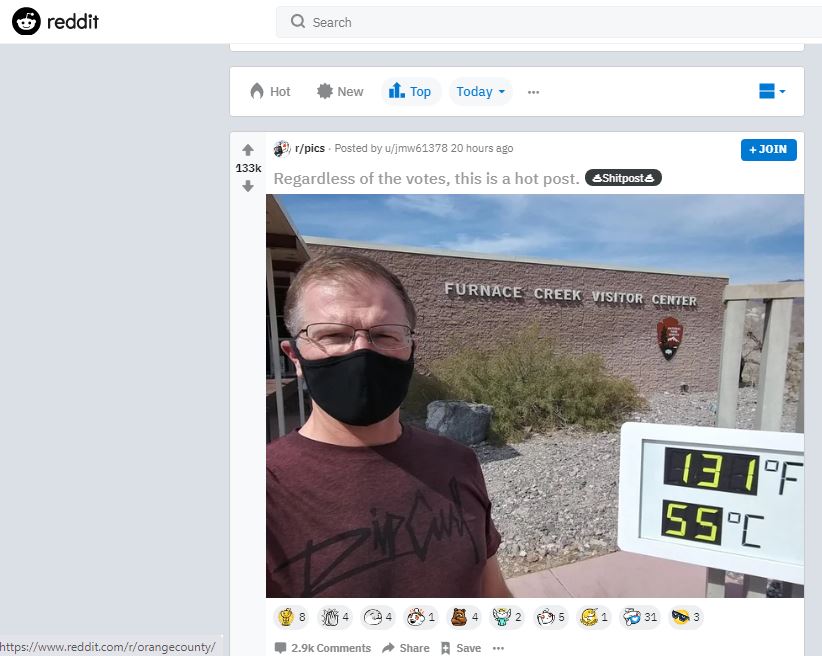 C2C: Were you sad about being shitposted?

I still have no idea what that means. I’m sure it’s nice.

Don’t go to the hottest place on Earth on your own for no reason. It’s stupid and you’ll die. Or maybe you’ll have a blast. Life is strange like that.

Questions from Your Fans

C2C: We have some time to answer take questions and address comments from your massive, growing and of course loyal fan base who totally will not go on to something more interesting tomorrow. Ready?

I was born ready. Shoot.

Okay, rough start. I get this question a lot, but no, my shirt says “Rip Curl.” I save my ripping for waves (or used to). Honestly, who would wear a Rip C**T t-shirt? I assume people who like Brussels sprouts, and they’re all misogynists anyway.

You should see the nude version. Did I mention I’m single? Also, badly sunburned? It puts the lotion on its skin… 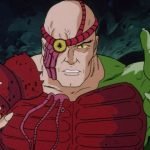 Finally, someone sees it. Maybe now they’ll return my SAG card. Golobulous forever! Wait, was I even in the movie? Whatever.

Keep it in your pants. Also, what’s your number? DM me. Is that a thing on Reddit?

Wait, are you that sexy mofo in San Diego that everyone keeps mistaking me for? You got me slapped, dude, and I still don’t know what for. Kudos.

Yes, because that’s a thing. Is that a thing? No way I’m searching for that on Urban Dictionary. Oh, wait, it’s not that bad. Shiny.

This guy? I have no idea. Okay. I’m not sure he’s white enough.

That’s better. But I hope you mean overlords?

So, I’ve done the same thing…in Fairbanks…when it was 54 below. And I froze my face. It was cool. Well done, sir.

Great question; the display is not the thermometer. It is apparently calibrated, above the ground, in the shade, and so on. Fun fact, the “feel” of the sun would have put the apparent temperate at around 145, and the ground would have been around 190 (on the black asphalt).  I should have brought eggs to cook. Officials are now in the process of confirming that the thermometer is setup correctly to verify the record.

Kidding. Everyone said this. Literally, everyone:

From the pedia: “The William Tell Coleman Borax Company established Greenland Ranch in 1883, named after the green alfalfa fields which they planted there. They established a weather station at the ranch in 1891. Greenland Ranch was renamed Furnace Creek Ranch in 1933… Furnace Creek was formerly the center of Death Valley mining and operations for the Pacific Coast Borax Company and the historic 20 Mule Teams hauling wagon trains of borax across the Mojave Desert.” Which doesn’t answer your question, so I’ll just say…hot.

+3 points for noticing a living bush in the picture

C2C: Well, thank you for joining us for what has been one of our more pointless interviews. Keep up whatever it is you’re doing, and good luck with the Dorito breath.