Just a under week ago, though it seems far longer, a virtual ultra running event called the Quarantine Backyard Ultra (QBU) seemed destined to continue indefinitely. The two final runners, Radek Brunner and Mike Wardian, had run more than two-hundred miles and there was hope they might break the 68-hour / 283 mile record held by Johan Steene or even, some whispered, reach the almost mythical three-day / 300 mile goal.

Radek ran on a treadmill in the final hours. Wardian did laps around his neighborhood. Thousands watched on fragile Zoom video feeds. They ticked away laps 60, 61, 62 and neither runner even looked tired. Three days of no sleep, constant 4.167 mile laps, rushed carbohydrate snacks and micro naps–all for an unofficial race with no prize other than personal pride. It was a strangely beautiful thing that united a small corner of the internet, until Radek was disqualified on lap 63 for not starting his treadmill on time. Things were less beautiful after that. 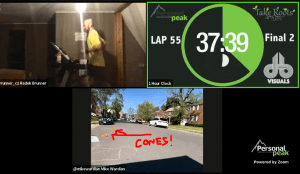 You can read that story here. This interview is not about the details of the QBU, but about how Radek came to the race, the disqualification, and what’s next for him as a clearly underappreciated elite ultra runner.

This interview was conducted by email. As a non-native English speaker, Radek has allowed me to edit some of his responses for clarity. We’ll also try to provide a Czech translation, below, so you can read the interview in his native tongue. That said, let’s get started…

How did you first hear about the Quarantine Backyard Ultra? When did you decide to run, and why? What were your initial goals?

I read about it on Facebook. My friend Bob Hearn was in and I subscribed too. That was just 14 days before the race. Then a few days before the race, it looked like it might not happen at all.  The weather in Czech republic was great and, two days before when I went with my friend on a 54 km long training run, I thought it might be better for me to just to a normal outside training run on Saturday [Apr 4, the day the QBU started]. But on Saturday morning, I said my wife: okay, I’ll try it, but I’ll only run til midnight and then go to sleep. That was my first goal. 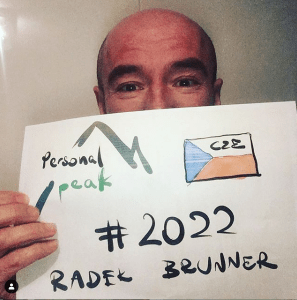 What were you most concerned about? Injuries? Fatigue? Technology?

After a few hours I had a problem with knee, but after the next two or three laps it was better and I forgot about it.

Who did you see as the biggest competitor when you started? Was there someone you wanted to beat?

For me the biggest competitor was the elite field, especially Pete Kostelnick, Olivier Leblond, Greg Armstrong and of course Maggie and Courtney. It was absolutely amazing to run with these great runners. Every time somebody from this field quit the race, I was very surprised.

What type of training were you focused on up until the lockdown?

I didn’t prepare for this race. I did it just for fun. My training preparation was focused on a 24-hour race in Basel-Switzerland, but it was canceled the week before this race.

Were you hoping to win because you wanted to go to the Big Dog Backyard Ultra? If so, have you done other backyard-type races?

When you first started, was the technology working well? Were there any concerns?

No problems; I thought that everything worked very well. I never tried the Zoom app before. I installed it on my laptop an hour before the start, and it worked fine.

After lap 60, it seemed like your running changed. Were you tired? Any injuries or concerned? How far did you think you could go?

I don’t think that my running routine after 60 laps changed. I was focused as usual, and got a small nap between laps 56 and 62. I felt good. I was prepared to run more than 62-63 laps.

Can you describe the details of what happened on lap 63? What happened with your tablet? Were you wearing a watch with a different time?

My watch I used only for counting distance. I had a foot pod on  my shoe, which I calibrated the day before outside, so I was sure of the distance on every lap. I corrected it with the treadmill.  The problem was that on my laptop the sound was muted, because I switched off the sound to sleep [Other participants on Zoom often talked between laps]. And on big screen, I had no timer. That was my issue.

On the tablet, I had the stream from Facebook, and it was delayed. This was my mistake, I know. All the other laps I started with laptop, but this lap I started with tablet and it was a bad decision. I was prepared on the treadmill at the right time, but I did not start at the correct time. I was prepared to run, but it’s forbidden to start early (before the bell). So I waited for the bell, but on the tablet. After I heard it, I started.

After that, my phone ringing and somebody from HQ at Personal Peak called me and said that I missed the start. But I told him that I started at the bell. Then we confirmed that tablet was delayed. He told me, okay, keep going and complete the lap. So I got back on the treadmill and ran, but after I was finished the race director told me about the disqualification.

I thought I hadn’t done anything to break the rules. The whole time, I streamed my treadmill and all my steps, for more than 62 hours, every minute. But I still know the mistake was my own. Only mine. Maybe, that this decision from race director was hard [strict], but that’s okay. Rules are rules and I agree with it. I was just sad, because I knew I could run longer than 62 hours, and Mike could too. We both wanted to keep pushing together toward the 68 hour record.

When you heard about the disqualification, I’m sure you were upset. I know from other interviews you saw it as unfair or overly strict. What do you think Travis and Personal Peak should have done instead?

Maybe they could have confirmed that my tablet was delayed and that it was not a health issue, and see that I was prepared to run further. But that’s just a thought.

Imagine that they had talked to Mike Wardian, and he had agreed to continue the race. And then you won. Do you think people would have been okay with that, or would there have been a controversy around that win because of the withdrawn disqualification? This is just a hypothetical.

The way it happened, continuing was not possible. But okay, if we had continued and I won, I still would not be not satisfied with it. I want to win in regular race, with strict rules that everybody follows.

Going forward, what do you think should be done to clarify the rules or improve the race format?

I don’t know. Maybe it would be better if everybody ran only on treadmills and stream the entire time. But technical problems are common, and still would be. It’s  a problem with all virtual races.

After the race, did you get a chance to talk to Mike? How was the conversation?

No, we don’t speak together. We only messaged. Mike is great runner. I’ve known about him for a long time, and for me it was great when he wrote me that for him it was a great race with hard opponents. And that he was counting on me too.

I assume that you’d like to run a backyard against Mike and others in the future. Is this now a bigger priority for you than it was before?

No 🙂 I don’t know if I want to try something like this again. But maybe my plans for the year will be change, and I’ll be with Anna [Carlsson] and Mike in October at the [Big Dog] starting line?

As you know, if you won the Big Dog Backyard Ultra, you’d get a golden ticket to the Barkley Marathons. Is that something you want to do?

No, I didn’t know that, and I don’t plan to start in the Barkley. I think, there must be runners with good English, because you run with navigation from books? And I think, that I will be lost on the first loop :).

Thank you, Radek, and good luck with whatever comes next. 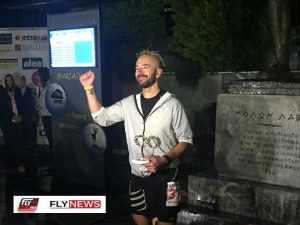 Radek is an accomplished ultra and Spartan runner. You can learn more about him and his many accomplishments on Facebook, Instagram, Strava, UltraSignup and on his personal blog.

If you have any questions or thoughts about this interview for Radek, please let us know in the comments below.