Random notes on random hikes and such.

Was planning R2R2R, but I’m in terrible shape and it was freezing (snowing) then raining at the bottom. Kam would have frozen, and I would have bonked, so we turned around at Phantom and went back up. I was so damn tired it was silly.

Time to bottom around 2:45 (slow), 15 min screwing around, then 3:40 up (slow). Snowing or raining all the way in both directions. Both of us got chilled on way back to car (in the 20s and windy). They had closed gate to Cameron, so we were stuck in lot and just turning car on when plow came by to set us free. Good we turned around; we were both chilled badly, wet, and Kam’s hands were numb…so, lazy day warming up back at the hotel. Happy New Year. 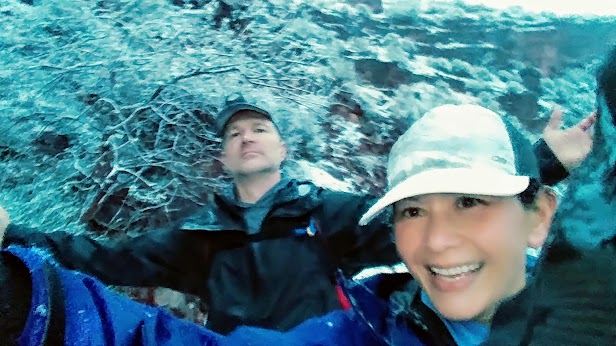 After coming back from Vegas to see Mom at Christmas, drove to Baldy quickly just to get some exercise. Nice day out. Made it about 2/3 of the way up the switchbacks above Bear Flat itself. Wore pants, which was a bad idea; sweating like mad the whole way.

Despite legs tired, made good progress until just below the dead tree, then had to rest for about a minute. Kam was far ahead by this point, but caught up to her right after tree when she stopped due to hurting booty injury. She later decided to go on and matched her best time of 1:45, and would have easily beaten her record if she hadn’t stopped for 5+ min. I ended up doing 1:04 to top (same as yesterday) and 1:51 RT…so…there you go. My best time, it’s not going to get much faster until I can run it…

Nice cool weather. Still amazing number of people on the trail. First real runner I’ve seen pass me on the way up in a while, claiming he hit the top in 0:45. Not sure where he started (even at bottom of hill), but good time no matter what. I was 1:04 to the top, 1:52 roundtrip. Some buff kid was chasing me up and down and sounded like he was going to die. Hope he made it. Tendons mostly good.

Nice weather. Too many damn people.

Best time and only one bonk this time, so, you know, improvement! Happy Thanksgiving.

Same hike, different day, but with Kam jogging today. Both to top in 1:05 with her jogging the flat bits. She finished in 1:45 running down, with me coming in second at 1:55 hiking (with some skipping down the fun rocky bits). Nice day. Still achy on the tendon side, but such is life. It’ll be a long time until I can run again…

No matter how poorly I eat or sleep, this appears to be about the hikin’ time. Beautiful day and nice clean air from winds. 1:10 to top, 0:53 down.

Was going to ascend in windy windy mcwinderson conditions, but about 1/3 of a mile in I realized I’d left my laptop in the car and didn’t want it stolen…so left. Not really a hike so much as a sad commentary on absentmindedness.

Got up to saddle between picnic tables and dead tree, and hammy tendons were squeakin, so stopped and enjoyed a rock.

Same as yesterday but from upper lot, which is slightly shorter (not sure on exact difference, but works out to about 2-3 min RT at moderate hiking pace). To top in 1:08 and RT in 2:00 (0:52 on descent). Total variance from yesterday attributable to different starting point. Little more pain in hamstring tendons, none in Achilles. Crazy crowded.

Hadn’t done much in a few weeks of travel to Denver (to see Cori and Shannon) and job interview stuff in Ahaheim, so needed to get outdoors and suck my way up a peak. Despite feeling tired and chubby, I got to the top in 1:10 (almost exactly) and RT in 2:05 (0:55 on descent), which is not a bad time at all with zero running (except skipping down the short rocky sections). Felt pretty good afterward. Minor pain in hamstring tendons, none in Achilles.

Somewhere near Brainard Lake or something. Very short, but great to be in the snow.

Random and ill-advised. Still, did it 🙂 Oddly, the things that hurt least were my hamstring tendons. Back was killing me. Also bonked on SK ascent. Long day :).