Rich “The Troubadour” Limacher (aka scRitch) is a runner who runs runs like no other runner runs. Here’s his trip report from the 2006 race, or at least his part of it, as originally published on Ultra List and also on Matt Mahoney’s great site. 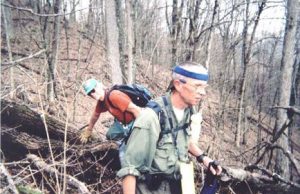 On Saturday, safely shivering in Chi-Town (after the Lakefront 50K) and while chomping rice and bean mouthfuls while trying to describe to the wide-eyed multitudes just what in the hell I was doing last Saturday, someone suggested this should be the title of my book, or at least a chapter in the book, but I’m gonna settle for an e-mail subject line.

I was peeling back the layers of Windy (no shit!) City clothing to expose my forearms full of sawbriar scars, and I was saying, “Hmmm, I guess they’re healing now. That’s good.” And then I proceeded to describe–in “excitable boy” fashion–how, just one week prior, there was so much blood streaming out of these slashes that, once when I looked at my watch, I couldn’t read it. It was covered with blood.

So, I’m thinking now, when you can’t even tell how late it is or behind you are–because your whole body’s bleeding and you’re not even in a war–maybe you’re OK after all, huh? Maybe I should’ve never even bothered with wiping off the “dial.” At Barkley, you mostly tell time by the sun. Maybe the only real instrument you need is a calendar.

I *KNEW* things were going to be bad this year when I first went into the Visitors Center to register–and pay for–about a half-a-dozen campsites for my friends, who basically assigned me the non-paid job of reserving their favorite sites, since all state parks in Tennessee no longer take campsite reservations. (So, for a few days, I’m sure it must’ve seemed quite strange to your average camping member of the general public who saw only two vehicles in the park but discovered half the sites were paid for. “I mean, come on! How much room DO ya need, buddy, to park that damn tank you’re drivin’?”) Anyway, my point is that, after registering, I went outside to use the pay phone that’s been there since probably the Civilian Conservation Corps built the place in the 1930s.

But… the phone was dead.

Right away I go back inside and “complain” to the ranger, and right away he tells me: “Oh, that phone hasn’t worked since they changed companies. We’ve told them, but they refuse to come and fix it. They say it’s no longer economically viable to maintain that pay phone.”

So now you have: a state park, a state park headquarters, a full-time staff, a whole bunch of paperwork (on the outside of the building) to allow you to register and then go “backcountry camping”–but there is no telephone. This means that if, for example, you’re Norm Carlson or Rich Limacher and you happen to be camping “up in the hills somewhere” and one of you is close to death, the other one will no longer be able to hike down and phone for help. The both of you might just as well lie there and die.

CELLPHONES!!!! It is all the fault of your gawd-damned cellphones!!!! So, now my basic question to the “new” telephone company at Frozen Head State Park is: “what in the hell did you take over that outdoor phone for if you never ever intended to visit it? Hey, save money. DON’T BUY THE PHONE!”

Which brings us right back to Chicago. I expect, within the next few weeks or so, to waltz into the Museum of Science & Industry and have a look at their doubtless brand-new exhibit: “The Pay Phone, circa 1920-2005.”

Which brings me right smack back to Barkley and my misery at not being able to telephone my bride and wail away about bleeding to death.

But… maybe that’s… a good thing?

My second HUGE complaint is against “Granny’s Diner.” Did you know that Granny’s does NOT serve breakfast on Sunday mornings?

Sure, I realize I’m pitching discordant chords to the choir here–on accounta how most of you are still out on the course Sunday morning and have no clue (about Granny’s OR the course) of course–but, really, if they’re open (which they are) and not in church (which they aren’t) why in the hell can you only order “lunch” at nine o’clock in the morning?

Let’s get back to Stallion Mountain, shall we? *That’s* the last place I felt any familiarity whatsoever with the Barkley course this year on the all-new Barkley course. I was with a coupla guys (Stu and Keith) and we even “ran” (uh-huh) right past that old spot where BOOK 3 used to be. We paused, caught our breath, and I lifted that stone.

“Nope!” I hollered (we were catching our breath at different places: one peeing, one pooping, and I’m looking under rocks). “Ol’ Laz and the boyz musta cleaned the course, ‘cuz last year’s book is gone!”

Good job! Sooner or later we ARE–for sure–going to convince the Tennessee Department of Environment and Conservation that the Barkley does no damage and leaves no litter. The normally well-patrolled park wouldn’t tolerate it.

I must confess puzzlement, however, when (as for example this year) we Barkleyites stumble across “the old washing machine and refrigerator dump,” the deer-hunting stands, the beer cans, the ancient rusting mining remnants, the “meth lab” (!!!), and even that guy whose HOUSE and DRIVEWAY have been built entirely on state park property.

And we are worried about leaving behind a torn-up hardbound copy of “Ultramarathon Man: Confessions of an All-Night Runner”?

Dig this: Stu and Keith and I watch in amazement in the woods on Saturday, April 1st, as this beat-up old Tennessee pickup fulla good ol’ boys comes clanking and clunking up an old “coal road” (unused since the mining days of 50 years ago) and say to us: “Y’all don’t think it’s too early for mushrooms?”

Apparently there are only TWO reasons on earth to be in these woods on a Saturday: 1) poachin’, or 2) drinkin’.

Ask Dan Baglione. We can’t help but wonder just WHAT in the world he might have told the good ol’ boys–who gave him a ride–the third reason was for being in those woods on a Saturday. Wait a minute. In his case, it was a Sunday.

Let me take a stab at it:

Dan: But I’m not going for the hundred.

Dan: No. Actually I’ve only come about two miles.

MUCH later, back at camp and after just about everyone who’s sane had quit or been timed out, we learned of an even more exciting “adventure” undertaken by our friend from Switzerland, Milan Milanovich.

He went to prison.

And he WASN’T “poaching” OR “drinking!”

No, he was only trying to decipher this all-new LONGER and even MORE IMPOSSIBLE “environmentally more friendly” Barkley course. This new one which now: takes you across the county highway (twice) which goes through Petros and right past the Brushy Mountain State Penitentiary (the badass one, the maximum security one, i.e., the one bad ol’ James Earl Ray escaped from and, some say, BEGGED to be taken back to because the Barkley woods were just too terrible).

Anyway our fearless leader, a.k.a. Lazarus Lake (who once tried to tell me was an actual name of a serial killer), briefed us extensively before the race to: BE SURE to follow the correct draw up the mountain after re-crossing Route 116, because if we don’t–we’ll be in the gunsights of the prison guards). “Draw.” I like that word. Sounds like a sweet little innocent cartoon, huh?

Wrong. “Draw” in Tennessee language means: STEEP FREAKIN’ MOUNTAINSIDE with SAWBRIARS all up in your face and slicing your bodyparts to ribbons.

Sure enough, he goes right up that mountainside closest to the nearest guard tower.

Next thing he knows, a screaming Brushy Mountain “corrections” officer, followed closely behind by three more huffing and puffing exhausted overweight employees of the Volunteer State brandishing firearms, is hollering–in English (or, Tennessee drawl?)–for Milan to: “STOP! FREEZE! DROP YOUR PACK AND PUT YOUR ARMS OUT TO THE SIDE! NOW, KID!!!!!!!!”

It must’ve been hilarious, although I’m sure he was petrified.

Not only did the guards DEMAND that Milan drop to his knees and crawl slowly down the hill towards them, but then they searched him, grabbed his pack, and marched him right back to their paddy wagon. Then, sho nuff, they hauled his ass back to prison.

Yes. No “Miranda rights,” no warrant, no writs of habeas corpus, no lawyers, no public defenders, no German-to-drawl public translators, nuthin’.

Milan regaled us with how they marched him from the vehicle inside the prison–with armed guards in front, behind, and on both sides of him–and into a well-lit room full of the D.O.C.’s finest. There, I’m thinking (if my German understanding is adequate), they stopped just short of strip-searching our nabbed fab European but fell full onto examining every single item in his backpack…. which–can you imagine all the goodies in your average ultrarunner’s backpack?–must’ve seemed to them like the narcotics motherlode.

In there was: white powder, white capsules, little pills, strange beverages, exotic European containers, and wonder-of-all-wonders… a topo map with an escape route drawn on it!

Add to that your basic good ol’ boy curiosity about little red “cranberry pills” and you’ve got yourself a scene from a soon-to-be upcoming reality TV show.

And of course… no identification.

Maybe now you can understand why Milan missed the cutoff?

Reflecting back, of course (oh, it all seems so hysterically amusing now), we can’t help but wonder how prison guards might imagine some inmate being nuts enough to create a race bib number containing the following words: “Barkley Marathons: There is no point.”

Ahh, but now we’re thinking a tad further into the future: Now that Milan’s been “behind bars” and has inadvertently “tipped Laz’s hand,” what will you wager that each and every year from now on, there will be inmates of Brushy Mountain State Penitentiary volunteering to work in the print shop making race bibs containing Barkley numbers… and then waiting till the Saturday closest to April Fools Day to make their break?

It’s just too bad James Earl Ray didn’t know about the Barkley, eh? I’m guessin’, if he’d have only known, he might’ve been able to make it to Son Of A Bitch Ditch.

Let me just add one small (concisely worded… HAH) additional comment about this vastly (emphasis on “VAST”) new and improved 2006 Barkley Marathons course: Mike Bur, you are delusional, buddy, if you think this one’s SHORTER!!!!!!!!!! 😉

Oh. Oh yeah, with regard to all the fine feline superhuman women at Barkley? I’m thinkin’ now “my heroine” is Lou Peyton. This year she came to camp… and stayed there!

And finally, getting to Tennessee and back–for me–requires driving through (or near) John Cougar Mellencamp’s home town. (There’s yet another “-camp” for ya.) So this year the song that most drove itself into, around, and through my skull was “Rain on the scarecrow, blood on the plow.”

OK, John. We need a sequel. How ’bout: “Sleet on the racecourse, blood on the watch.”

When you cut your runners’ dignity, they can’t make it thru the swath ‘Specially ‘cuz of weather and blood bled on their watch Blood on the forearm, blood on the watch.

Well, there’s nine torn-up books now hid in viper pits Pages torn by runners they have used to wipe their….. I think about Mr. Ray and prison guards and such And now I sure don’t feel like runnin’ all that much

NOW… do I have an “amen,” brothers and sisters of our little confederacy???

Yours troubly,
Barkley scRitch
“Have Lute, Will Sing”

Reproduced with permission. If you’d like your Barkley report on the site, just let me know. If you didn’t understand any of the terms, check out the Quick Reference Guide.