Rich “The Troubadour” Limacher (aka scRitch) is a multiyear alumni of the Barkley Marathons, and occasional chicken cook. Here’s his trip report from the 2004 race, as originally published on Ultra List and also on Matt Mahoney’s great site.

The Barkley Marathons:
When Even Your Best Isn’t Good Enough 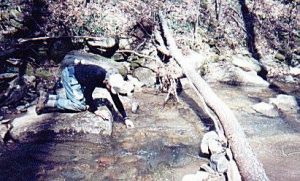 [I found myself the other night (in fact, it was last night) trying to explain my absence to an incredulous co-worker :]

She: Okay, you were WHERE?

She: And how long was this “footrace”?

Me: Well… uh, that depends.

She: No it doesn’t. How LONG was the race, Rich? How many MILES from the start to the finish?

Me: Okay, well, I suppose you could say a hundred miles.

Me: But really, it’s longer than that.

Me: Yeah, I think most would agree.

She: Well? How many miles did you run?

She: What? Only TWENTY? Why’d you stop?

Me: Well, I didn’t exactly just “stop.” I made it back to the main starting place.

She: You went backwards?

Me: No. No, you see, this thing happens in, like, a jungle. The deepest, darkest, baddest jungle of Tennessee.

Me: Yes, that’s right. And it supposedly goes around this huge “loop” five times. So, no. I never went backwards… exactly. I went once around a big circle.

She: And then stopped.

Me: Yes. Well, because it was after dark.

She: TO RUN JUST TWENTY MILES???

Me: It’s a tough jungle.

She: What time did you start?

Me: I think it was about a quarter-to-nine.

Me: No, in the morning. I finished at night.

She: You “finished at night.”

She: But you said you didn’t finish. You only ran 20 miles!

Me: That’s right. What I meant was, one loop.

She: In twelve or thirteen hours.

Me: Yeah, I guess that’s about the size of it.

She: You were only moving about one mile an hour?

Me: Well, maybe one mile every half-hour.

She: No, that would mean you’d be done in ten hours.

Me: Right. I guess I was a little slower than that.

Me: It’s a tough jungle.

She: THERE IS NO “JUNGLE” IN TENNESSEE!!!

Me: Oh, my friend, but there is! It’s got thorns and briars and nasty stuff…

She: Okay, so where exactly is this “jungle”?

Me: All right. Let me try to give you some idea. Let me give you an example.

Me: Okay, so who’s birthday do we celebrate every January?

Me: No, that’s February. I mean, you know, they made a national holiday out of it. It happens, oh, maybe every third week of January.

Me: Right! Only it’s Dr. Martin Luther King, Jr. He was a minister.

She: Before my time.

Me: Yeah, well, maybe so. But do you know what happened to him?

She: He got shot.

Me: No, that was Lincoln.

Me: NO! Booth shot Lincoln! PRESIDENT Lincoln! And, whoa, that was a looooong time ago. After the Civil War. No, I’m talking about who shot Doctor King in the 1960s.

She: Okay, let me guess. What’s the first initial of his first name?

Me: Yes! Only it was James.

She: Didn’t he have three names?

She: So was John Wilkes Booth!

Me: Hmmm… interesting. But no. Guess again. You do have the first two names right, though.

Me: YOU GOT IT!!! Very good. So. Okay, what happened to this assassin Mr. Ray?

She: I don’t know. Jack Ruby shot him?

Me: No, that was Oswald–who also had three names. Hmmm…. No. Guess again.

Me: Well, don’t you think they put him in prison?

She: Probably. Unless he hired Johnny Cochran.

Me: No, Cochran hadn’t been invented yet. Trust me, they put him in prison.

Me: So, then guess what happened?

She: I have no clue. He escaped.

Me: RIGHT! Yes! In fact, yes he did. James Earl Ray escaped from prison.

Me: No kidding. So, okay, let me fill you in. That very prison from which he escaped from… well, it just so happens that it lies right-smack-dab NEXT TO this Tennessee jungle I was trying to run in. And when he escaped, guess where he went?

Me: Right you are! The horriblest nastiest baddest ugliest wickedest thorniest meanest toughest jungle in the State of Tennessee. Right THERE, where I just was this past weekend… trying to run 20 miles.

She: Out of a hundred.

She: So? Keep going! I haven’t got all night, Rich! Tell me the rest of the story!!

Me: Right. Okay, so Mr. Horrible X. Nasty James Earl Ray escaped from that prison only to get lost in the jungle. And he tried to keep going and he tried to stay alive… and meanwhile… you know, EVERY SINGLE COP IN THE STATE is out there lookin’ for him! …AND *THEY* CAN’T EVEN FIND HIM!!! What does THAT tell you?

She: They weren’t using dogs?

Me: Of course they were using dogs!

She: My dog can find anything.

She: So, he was lost in the woods. Get on with the story, Rich!

Me: Yes. He was lost. And probably starving and freezing and stabbed with thorns and briars and unable to climb all the mountains… did I tell you the place is chock FULL of mountains?

Me: Well, it is. And that’s why it takes so long–among other reasons, like no trail, nothing’s marked, no food…

She: Get on with the story, Rich!!

Me: Okay!! So, the long and the short of it is: they only found the guy after he GAVE UP and hoisted up some kind of “white flag” to surrender–probably his T-shirt. So, THAT’s how horrible those woods are.

She: And you hoisted up your T-shirt.

She: You just said you didn’t finish!

Me: But NOBODY finishes!

Me: Oh, all right. Let me give you another example.

She: Puh-leeeeze. Do NOT give me “another example.”

Me: Okay okay. I won’t. I just wanted to tell you that, in nearly TWENTY YEARS of this race’s history, there have ONLY been SIX people who HAVE finished!

She: Out of how many who started?

Me: At least. Maybe five hundred or so, all together, over the years.

She: Only six people got to the finish line?

Me: Yes, and two of them just did it this weekend.

She: But not you.

She: You didn’t try hard enough.

She: I guess your best just isn’t good enough.

Me: Nah. C’mon. Hey, look. Let me try to put this in perspective…

She: No. No “perspective.” You just didn’t get there. You went around the silly woods ONE time… and quit.

She: I wouldn’t be there. I’m not stupid.

She: That’s right. What do I want to go to the “worst woods” in Tennessee for? We’ve got Forest Preserves right here.

Me: Right. And they all have paved bike paths.

She: Right. And they’re scary enough.

Me: But this place is in the JUNGLE!

She: So? You’d have to be stupid to know that in advance, and STILL go there!

Me: It’s the challenge of the thing!

She: Right. Couldn’t you just run for 12 or 13 hours right here in our woods?

Me: Well, yeah. But it wouldn’t be the same. They won’t let you run after dark.

She: No. That’s right. They close the woods and kick you out.

Me: Right. So, that’s why I go to Tennessee.

She: So you can run in the jungle after dark and they won’t throw you out.

Me: I tried my best.

She: Your “best” isn’t good enough. You stopped!!!

Me: So did EVERYBODY!

She: No they didn’t.

She: You just said two more people got to the finish line.

Me: Well, yeah. But they gotta be superhuman.

She: No. They did their best, which was good enough!

Me: They practiced! They went down there for years! They studied the damn place night and day, forwards and backwards!

She: Like I said, their best was good enough.

She: Count your drawer, Rich. It’s time to go home.

Yankee Folly of the Day: People that just don’t “get it.”

Reproduced with permission. If you’d like your Barkley report on the site, just let me know. If you didn’t understand any of the terms, check out the Quick Reference Guide.