Nothing to see here other than random nonsense. Someday, this will again be full of great hikes and runs. Now, mostly whining. Actually, almost all whining b/c my injured plantar fascia prevents me from doing much of anything interesting. WAAAAAAAAHHHH!

Well, looks like I’m closing out this quarter with a whimper. Guess I strained my quad a bit on 20th / 21st rides, so took time off, then a week later when that started getting better, did a very short hike and somehow magically strained my calf. Seriously, fuck 2020. Someday I’ll walk again for like 2-3 days without a damned injury.

Sep 20 / Putting Around on Bommer Ridge

Got restless and went out to fart around. Left quad a bit twitchy, so took it easy, maybe 6 miles. Fun hour exploring Moro area.

Air quality was good-ish, so out the door I went. Added 4+ miles and lots of up and down to prior ride. Fun on the techy bits, but I still suck. Lots of people and close-calls on single-track trails. One guy ran off the trail when he saw me, which was a bummer but also funny. Traverse from bottom of Wilow back to parking lot was more technical on the uphill than I expected, and fun, but was a bit bonky by then. Last climb up a wheezer, but finished okay. Two gels, a few short rests, no apparent death. Win.

The air quality finally improved enough for another ride. Same loop as before, a little faster this time, though just as dodgy on the downhill single-track. More breathy / chesty / bonky this time, but probably b/c my insomnia is back. Was going to do longer ride but started tasting the air, so called it. Appointment with doctor tomorrow, so we’ll see if I learn anything there…

First real ride on the new bike, felt pretty good chesty / breathing-wise, but I’m a total wuss on the downhills. Still a really fun ride and not to crowded, and felt pretty good when done. 🙂

Just screwing around on new bike now that forests are all closed. Forced to conclude I’m just out of shape and have forgotten how to ride. Still a fun hour screwing around with only one minor tumble.

Well, finally got to ride the new bike. It’s great. I remain crappy. Breathy / chesty / crappy all the way, almost quit at crest (43:30), but farted onward to second saddle where I realize I was just grinding the trans-axle. Bonky, tired BS. Still, the bike ruled and I used the drop post on the way down, which makes that much easier. 😉 When I got to trailhead, ranger was closing Cleveland National Forest due to fires, so…not sure what the heck is next. Much work to be done. Another rider said 50:00 was a good time to Beek’s. Blarg.

A surprise break in air quality (from apocalyptic to “fair”) let me to an impromptu bike ride this am. The good news: my new little bike accessories work on my new awesome bike. The bad news: the air was still edible and it was over 90 when I started, so it didn’t last long. The air tasted funky and I was not enjoying myself. That said, looking forward to better weather so I can ride this new machine properly.

Weird day. Thought I’d try my first back-to-back ride since I started the iron last week, and it was definitely a bit soon. Made it to around mile 4 and just felt the bonk coming, and sure enough was a bit pooped on the way down. So, of course I went for a donut at Oliboli to see if it was better than Sidecar. Based on two savory options, it wasn’t. It was, however, right next toThe Path bike shop. So I wondered over and somehow ended up buying a gorgeous used bike off the demo rack. FML. It’s really lovely,  but why do bikes cost more than some cars? After several hours, this led to a second ride on BS to test the new bike, which is really lovely, but quite literally does not fit in my car w/o taking the front wheel off. Such suffering, I know. It’s so pretty. Now I must earn its love.

Took a day or two off due to tight calf, but it seemed fine today. Definitely feeling more energetic on the climb, but still bonked / got breathy at top of crux of climb (44:30). One week on iron supplements, and I’m definitely feeling better. Very jazzed about that, but wish my foot was healing faster. I really miss running. Related tracking.

So, this ride couldn’t have been more different than last week’s disaster. Didn’t push that hard, but still hit my best time to Beek’s (1:22), never felt chesty or bonked, and finished feeling energetic and happy. I think this is what other people feel most of the time? Freaking crazy. Only issues were back / sits-bones near the top (back was pretty painful), but I can work on that. Still passed by one guy, but he was hauling booty and I’m fine with it. Great damn ride. Now to hide inside from terrible air quality. Unrelated, but God I’m fat. 😉 Related tracking.

Same ride after little sleep and no caffeine, but hit crest in the same 48:00 as yesterday, within seconds. Kinda interesting how the body works. Feeling far less breathy and chesty, and could’ve gone faster, but I’m just going to chill for a few weeks to see if the iron helps. New shoes are working out great, and allow me to get out of the saddle w/o hurting my foot, which is a great change. Now if only the air quality were a little better…

First ride after taking a bit of a break to let air quality improve and recover from Saturday’s debacle. First ride after I started iron supplements (yesterday), so no expected change of course. New shoes work well but probably need a little shim in the toe-box to take up room. And I need to remember to click-out better; damn near fell over trying to unclip for the first time in a twenty years. 😉 Felt fine, and legs had a bit more juice than usual, but that’s probably just lower temps and rest. Time to crest among slowest times (48:00), so long ways to go.

Asked a rider what his time to Beek’s place was, and he said 50 min (if I heard him correctly). That gives me a number for a fit-looking 40-something guy on a newer (lighter) hard-tail that’s a full 30-35 minutes faster than my usual times (1:25) — more than 40% faster. Which is good news in a way; if I can figure my crap out, my rides should get a lot less terrible over the coming months…

Probably my worst bike ride in recent memory. Felt fine starting out despite fact that shoe was delaminating (embarrassing, but not a functional issue). But within about 30 min in, felt energy start to decline and was passed by pretty much everyone. Sixty-year old man. Desert tortoises. It was a thing. By 45 min (at crest, usual time) I could tell it was going to suck and then 10 min later I was fully bonked. Dead legs, elevated heartrate, etc. Water didn’t help. Gels didn’t help. Long, slow slog to Beek’s Place in 1:32 (my slowest time ever) and sitting down to rest didn’t really help. Legs and energy were toast. So tired on downhill (not even pedaling) I had to stop to rest. On the downhill! WTF? Rest of day way was a low energy, brain-clouded wreck. From a 2-hour bike ride. FML. Not sure what’s going on, but something is whacked…

Nice ride up to crest, felt fine, but it was hot. Need to start earlier.

Pleasant morning hike up with nice cooling cloud cover. Exactly the same 1:38 time up as before. Lot more people and fewer masks, but everyone was nice enough. Just really low energy the whole hike.

On drive back to Irvine, decided to detour through Death Valley to see if I could be there when heat record was broken. Drove carefully watching temp dial and with AC off on major hills, and there was no issue. Got to Furnace Creek around 3:30 pm and nailed the timing; it was 131 on by the thermometer and according to the news, peak temp of 130 and record was hit 4 minutes after I took picture in front of the sign ;). For a moment, in the hottest place ever recorded (if you ignore the prior disputed temp of 134 in the same place). It was freaking hot. 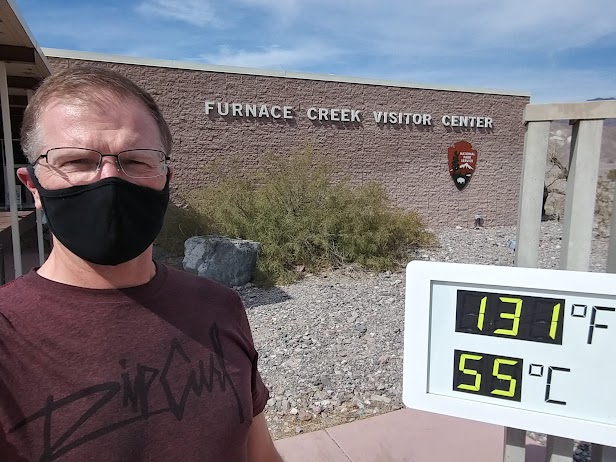 Stopped at Zubriski Point on the way out to do a quick walk in the record heat, and walked by four heavyset guys in sweat suits with camel packs checking out the sign for a short hike. I mocked them for being…idiots, and they seemed to agree. Lives saved. Check.

After abandoning the terrible idea of a one-day summit of Williamson, which I was in no way ready for, I wandered up the Meysan Lake trail from Whitney Portal. Strangely tired and disinterested, but nice day out. Actually, really tired. Kinda sucked despite beauty.

Was going to do longer ride, but smoke from Ranch Fire was getting to me, so turned around after valley. Then for some reason drove to Lone Pine. You know, because planning.

Back in shop. Should be quick. Need new bike soon ;). 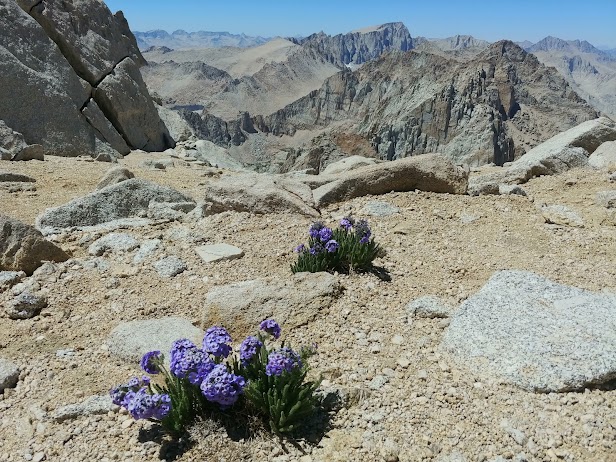 Long fun day (drive up and back from Irvine same day), if a bit on the slow side. Great to be in the woods with John again. Are the marmots fatter this year? Foot okay. Lots of salt pills improved attitude a lot, but that walk back (last two miles) still SUCKS.

Felt pretty good until legs tired out. Not fast, but not bonky or chesty either. Win!

Whee! At least my bike handling is getting better. Cornering well even with shot front shocks. Scared the crap out of a snake. Poor little guy. 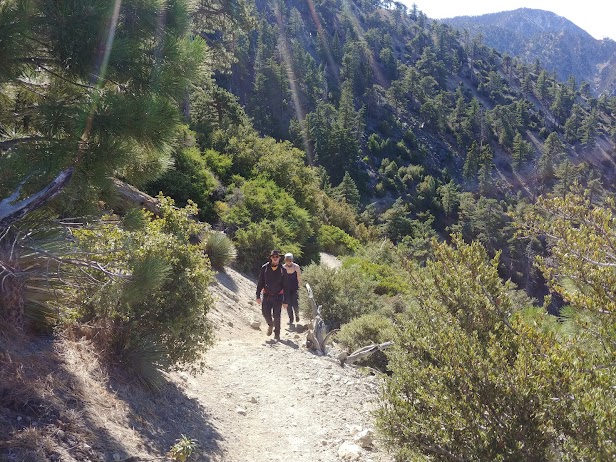 Fun day and foot was 95% okay. Managed to jog little sections at top, which was sad from a form / speed point of view, but better than nothing. Cori’s knees buggered her on the way down Devil’s Backbone and the lift / lodge was closed, so more of a hike than they probably expected. Still fun, and great fries in the village afterward.

Mountain bike ride up and back. Warm and a bit pooped by Beek’s, so didn’t go to tower. Other than being hot and tired it was a good ride. Didn’t get my butt kicked by too many spandexians 😉

Was going to do Langley, but jammed foot right below the lake and hurt stupid plantar fascia again. Brace sucked and attitude / energy worse, so took a nap on a rock below Old Army Pass and then moped back. Thirteen miles or something. Blah. 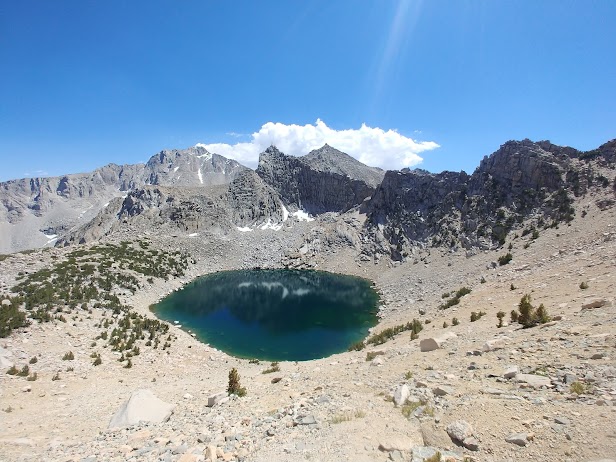 Really great hike after driving up from Irvine. 1:38 to pass, then spent 30 min plus chilling and talking, then walked on down. Great day, but legs feeling it more than I expected. Did it so fast I had to kill a lot of time that evening :).

Before this in July

Various rides, Bedford Peak hike with John, nothing too exciting. Foot is really limiting, but is getting better.